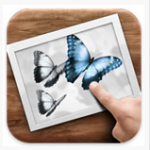 With Apple adding both front and rear cameras to the iPad 2 we are all adding more photos into our iPad 2 photo library. TouchUp is an iPad app designed by Roguesheep that is a cool iPad apps photo editor. We found this photo editing app easy to learn and was very fun to use. Basically your using the touch of your finger to tweak and make adjustments to your photos. This photo image editor app comes with dozens of fun photo effects that you’ll get lost in. Touchup iPad app has an endless number of photo layers that expand your editing possibilities.
We really like how with just a touch of your finger your could add an effect or erase it away easily without any worry of losing your original image.
The first step will be to import the image you will work with from your photo gallery (or even from Flickr). We do wish they would add Dropbox integration because not everyone stores all their photos on their iPad 2. Next you can start playing around with the effects menu from the drop down menu. You’ll be able to select brightness, temperature, sepia, contrast, blur, saturation and tint to begin your photo edits. If you make a mistake it’s not a problem as you can use the built in Undo button in Touchup. (demo video below the break)

Photo editing worked for us with our first try after opening the app. Having used Photoshop and other similar programs probably made it easier for us so you may want to take advantage of the numerous video tutorials that Roguesheep offers to explain its feature set. Our only complaints are the lack of Dropbox integration and the steep price. TouchUp is available here on the app store for $9.99

Whoa! That is pricey.

With the use of the iPad cameras along with your existing photos the number builds up fast. Great iPad app Sort Shots worth checking out.