Playbook is NO iPad 2 killer 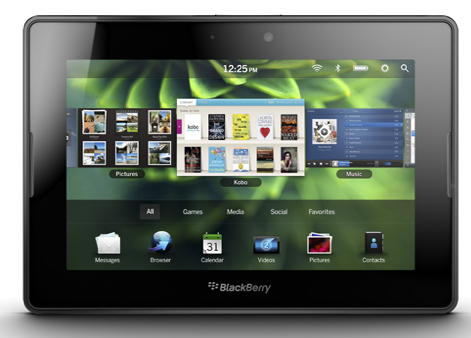 We’ve all read and heard the Playbook by Blackberry news feed from the press this week. Playbook is smart to match iPad 2 with the $499 pricing for the entry level tablet market. RIM’s corporate security features are included in this tablet release. They also keep up with the iPad 2 with a speedy dual-core processor and brand new QNX operating system. Why will this tablet launch by Blackberry ultimately fail to win mass appeal? This one is so predictable that my African Gray parrot chirped out these words this morning “300,000 apps….300,000 apps”. The iPad 2 is priced the same, has a bigger screen, is thinner and a library of 300,000 apps. C’mon who is going to buy this fledgling copycat iPad wannabe without any of the famous iPad 2 apps? Owning Playbook means NO Skype, NO GPS app, NO built-in email, NO Pandora and NO Angry birds.  It has also been noted somewhere that Playbook can not even run any of the Blackberry Smartphones 27,000 apps. This was Blackberry’s desperation attempt to catch up to Apple. They were late to market with a sad attempt to compete with the iPad 2. And in the end their demise will be plethora of iPad 2 apps.

I love blackberry. You and all you apple cult members are just fearful of competition. Why are you so worried?
Isn’t there room for alternative tablets?

Go dude. You forgot to say that Crackberry is the
next Blockbuster. I hope not. I own RIMM stock

You sound like someone who just purchased an iPAD2, only to realize that the PlayBook was around the corner – and now you cannot afford one of each…

AND – You are basing your info on Wrong intel,… it does have GPS,.. Skype=Yes, what is all this about built-in mail? you already have that on your phone – right? and the PlayBook actually supports a lot more web pages than the ipad does,.. anyway – native e-mail is only 1 month away.. not bad to be a brand new device.

Of course an app should be special made/tested for every device it runs on.

Hey Dent,
You must be a RIM rep trying to keep your job. So your logic
is that the world wide web would be better off if there were only a few thousand websites rather than a Ga-billion of them online.
Less apps is more? Wow interesting spin.
I hope you can stay employed but don’t quit your night job
over Playbooks success.

Neither is better than the other, they do different things. If you want access to iPad apps, then you buy an iPad. If you want a tablet that integrates seamlessly with your email/calendar/tasks/BBM, then get the PlayBook. Neither does EVERYTHING that EVERY consumer wants.

However, with the PlayBook now running Android apps, and with a native Facebook client, SUPER EASY tethering with your BlackBerry when not on Wi-Fi, and (dum dum dum) built-in support for Flash on the web, it’s a “better” device straight out of the box. You can’t argue that point, it’s simply true.

“Thinner” doesn’t earn as many points as “the full web,” I’m surprised you even listed that as a benefit of the iPad over the PlayBook… I could just say the PlayBook is more compact and lighter. Duh.