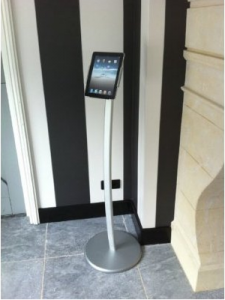 We found a unique and modern german-designed iPad stand today that we really like. It’s called the iPad Butler Alu-Floor Stand and comes from the traditional German company, Vogelsang Engineering. We like the look of this clever deluxe stand for a range of applications. This could be a useful stand for a mobile kiosk check-in at medical offices or a product demo area in showrooms. What a statement of modernity when you enter the waiting room at instead of signing in with pen and paper you tap on the iPad Butler station.
This iPad Butler stand is made of aluminum and was originally designed for use in the living room. This iPad accessory has a flexible gooseneck that can be rotated in all directions so that you (screenshot and video below the break) can achieve an optimal viewing angle. This would be a great stand for use at trade shows or mall kiosks. I think this looks so cutting edge in design alongside the iPad that it will pay for itself with all the extra traffic you will attract. Because it brings the iPad tablet up to eye level it just visually grabs your attention and pulls you in.

iPad Butler also makes a theft-protection add-on for $99 that will lock the iPad to the iPad Butler stand. This iPad Stand would also be great for hands-free work around the kitchen or at the grill. I could even use it in the garage for when I’m working on restoring my old Toyota Landcruiser. This is a deluxe iPad accessory and the best price we could find was on Amazon for $379.99.UPDATE: No longer available on Amazon. Go here to manufacturers site. 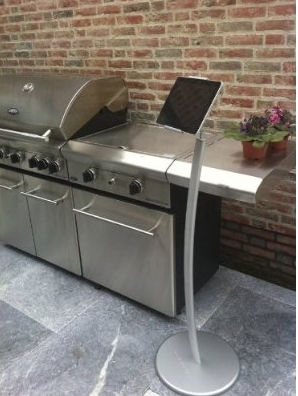 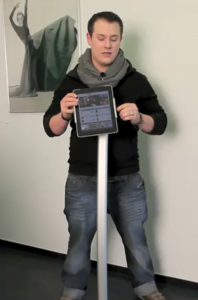