iPad 3 Release will use dual-LED 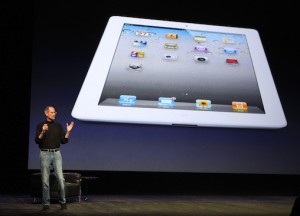 We miss you Steve!

What do you expect from the iPad 3 display with the next release? The asian supply chain monitoring website,Digitimes reveals that Apple’s iPad team is currently considering a few options that will offer LED backlighting on iPad 3. There is backlighting on the iPad 2 now but it needs a big upgrade in order to match up with expected higher-resolution display reportedly set to launch with the iPad 3 release.

Digitimes says the following on their report:

“With the next-generation iPads expected adopt LCD panels with resolutions higher than 2048 by 1536, the current single LED light bar designed for the iPad 2 has to be modified in order to maintain or strengthen the brightness the panels.”

Like most of us iPad fans we can’t wait for the iPad 3 release early next year. It is pretty much a given already that we’ll see a higher-resolution “Retina” iPad 3 display.