iPad 2 is hot in Beijing today 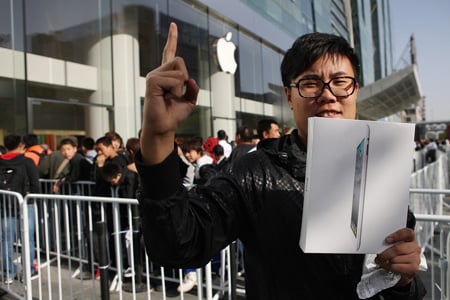 Today was a big day in Beijing China. Apple’s iPad 2 went on sale on the Chinese Mainland. And yes, there were huge lines waiting outside the flagship Xidan store in Beijing. Apple seems to have worked hard to lessen the gap between the U.S. and China releases of the iPad 2 this time around. The first-generation iPad took four months to officially arrive in China, while the iPhone 4 saw a two month delay and the iPad 2 launched less than two months after the U.S. release. China’s thriving grey market may have motivated Apple to shorten the gap between products so as to slow down the scalpers. When I visited Beijing a few years ago, for the first time, I felt like I was going back in time. To see this explosion of the iPad 2 in Beijing is very significant for Apple. China seems to be embracing the Apple brands which will ultimately be Apple’s biggest success story. This probably means that the iPad 2 is going to enter into the category of “phenom” with global product launches. The demand for iPad 2 is astonishing! It is not just an American-early-adopter buying trend. TheiPad 2 will likely make history as the most successful global product launch in the technology space EVER. Can you think of any other product that has done this phenomenally well? Leave your comments below.