This will be so cool to see implemented on the iPad 2 with it’s front and rear cameras. We expect so many new advertising innovations to emerge from the iPad 2 release.

The Year of iPad 2 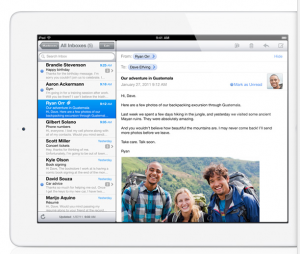 The big announcement today was about not only the iPad 2 but the color white for iPad 2. The iPhone 4 was supposed to have a white product but it is officially white and black in the Apple store. We just checked it and the iPad 2 is for sure also available in white. What do you think about it? It looks pretty cool and very Apple! 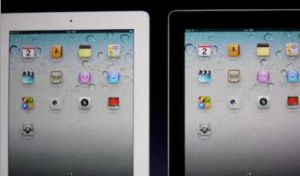 No small announcement today regarding iPad 2. All new design in the iPad 2 with a screaming fast A5 processor. All new design in iPad 2 has a Dual-core processor, up to 2x faster CPU. All out on graphics performance: up to 9x faster graphics. The size is smaller also 8.8mm thinner for iPad 2 compared to 13.4 mm.for iPad 1. It it comes in two colors both Black and white. “And we’re shipping white from day one.” say Steve Jobs. The ipad 2 display will have a resolution of up to  1080P. Battery life for the iPad 2 will have 30 days of Standby and 10 hours of battery life daily.

The rumors are soaring about the new iPad 2. The second generation iPad is rumored to be announced by Apple at an event in San Francisco sometime next week. Some say the iPad 2 will be revealed on 3-2-11 at the yerba buena center for the arts. Of course this is not rocket science to predict this since it fits with Apple’s usual annual announce/update for iOS products.

The new iPad 2 is rumored to include a front-facing video camera for FaceTime video chat in addition to a rear-facing camera for FaceTime and taking both pictures and video. This rear camera may be one megapixel and will shoot video in full 720p HD. The iPad 2 is also thought to include a faster processor, more RAM, and adopt and thinner and lighter design. We can’t wait to hear about the iPad 2!

UPDATE: Apple will announce the iPad 2 on March 2nd. Official invites have been sent out. Will Steve Jobs make an appearance?