Yesterday Apple released a new iPad advertisement that emphasizes the new iPad’s Retina display and this ad really brings it to life. Apples ad showcases the new iPad features such as emailing, reading via Newsstand, movie and TV show watching, iPhoto gallery making, Numbers document editing, drawing via apps, iBooks 2 textbooks, reading books. All of these features show off how rich the experience is on the iPad Retina display. END_OF_DOCUMENT_TOKEN_TO_BE_REPLACED Continue reading Has iPad 3 production already begun? According to Macotakara Japanese website is reporting that their source revealed that manufacturers Foxconn Electronics and Pegatron Technology have pushed the button to begin production of the iPad 3 for an early-March launch. Some believe this could be announced on February 24th, in honor of Steve Jobs birthday.

The report from this Japanese blog is based on unnamed Chinese sources. In the report they’ve described the new iPad 3 as identical to the iPad 2 but with many new internal features. There is a possibility of an overall thinner form factor if Apple chooses to use the new Gorilla 2 glass from Corning. Some of the rumored features might be in shape of the dock connector and location of the two built-in cameras. If the form factor stays the same then you’ll still be able to use your Smart Cover on the iPad 3. Some form fitting cases may not work, however, as the device is slightly thinner. END_OF_DOCUMENT_TOKEN_TO_BE_REPLACED Continue reading 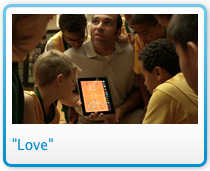 Just in case you’ve not seen this iPad 2 TV advertisement. Apple has aired a brand-new television commercial for the holidays about the iPad 2 called “Love”.

As with all of the Apple commercials this one illustrates the magic of the iPad tablet and also does a good job of tugging at our heart strings. (video is after the break)  END_OF_DOCUMENT_TOKEN_TO_BE_REPLACED Continue reading

Most Expensive Car in the World Includes the iPad 2

Luxury car manufacturer, Bentley, uses savvy marketing by engineering the iPad 2 into their new Mulsanne concept car. Bentley makes the most expensive cars in the world and they are displaying this new multimedia connectivity car at the 2011 Frankfurt Motor Show. The price tag on the Bentley Mulsanne starts at $291,295. (Screenshots below break)  END_OF_DOCUMENT_TOKEN_TO_BE_REPLACED Continue reading