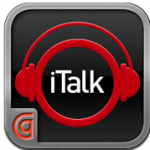 iTalk App for iPad claims to be a top-downloaded recorder app for iPhone and iPod. iTalk Recorder Lite 4.0 is handheld recording the way it should be: simple, robust and searchable. Use iTalk Recorder Lite for lectures, meetings, nature walks, or anywhere you want to be sure you’re getting high-quality digital recordings.

iTalk Lite is the free version of iTalk Recorder App which is a paid iPad app. It has most of the same recording features, but with an unobtrusive ad bar at the bottom of the screen instead of advanced playback controls. Also, emailing recordings on your iPad in iTalk Recorder Lite is limited to files under 2MB. Some cool features in this iPad app are the High-quality handheld recording and the clean graphics. The user interface and controls on this iPad app are well thought out. Basically you tap the big red button to start recording, tap again to stop; slide forward and back when playing back your recordings. This iPad app also has a user-selectable sound quality : Good (11.025 kHz), Better (22.05 kHz), or Best (44.10 kHz) sample rates. Give it try as it available on the Apple App store.

Finally this app for iPad! Skyfire is the browser that not only allows you to view Flash Videos on iOS, but provides as well the best integration of social features for a quicker, more informative and most of all fun internet experience. No more worries with flash when browsing the web. We recommend this iPad app and consider it one of the best iPad apps of it’s kind. Eventually the squabble between Apple and Adobe will end but for now this is a great solution for surfing those websites that use Flash instead of HTML5.

If you need a nice Alarm Clock for you iPad we recommend Alarm Clock Pro turns your iPad into a beautiful digital clock with gorgeous themes and an alarm clock that sings your favorite tunes. Set this iPad app to awake you gently with your favorite songs.