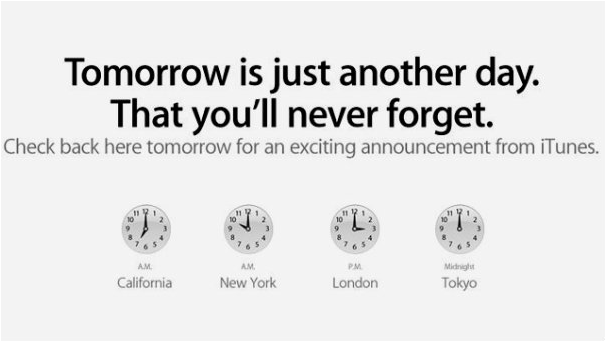 If Apple says it is a BIG ANNOUNCEMENT then you can bank on it. Apple has changed the homepage of its website with a mysterious teaser, indicating an “exciting announcement” is coming to the company’s iTunes service on Tuesday. It appears to be an international announcement by the mere fact that the clocks include Tokyo and London.

The Apple.com site now reveals that “Tomorrow is Just Another Day. That you’ll never forget,” but what exactly the company has planned remains up for debate. Leave comments below as to your best guess.

1-A subscription for monthly access to the iTunes library. The whole library.

2-The Beatles have finally made it to the iTunes http://www.viagrabuynow.com/ store.

5-Steve Jobs will stream his iTunes keynote from the front page of the website.(Which indicates how huge this Apple event is)

Minutes after Apple updated the front page of its website to a giant announcement indicating a forthcoming launch, technology blogs buzzed and Tweets have been flying around speculating what this will mean.